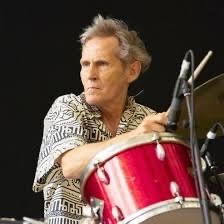 Most people don’t make much of an impact on the world, except to the family and friends who love them, but then there are others who educate us, and change the way we see things.  And when they leave the table forever, the world is a smaller place for them having gone.

Today I was thinking of the singer, musician, and actor Levon Helm because as I drove the forty-five minutes from my house to West Chester to see my grandchildren, I blasted the amazing Good Night Irene on my car radio.  It’s from the Live at the Palladium NYC New Year’s Eve 1977 album. Actually, it wasn’t exactly on my car radio; it came through it onto my blue- toothed hearing aids, which made it feel like Levon was sitting next to me in the car.  In case you don’t remember it, Levon played Loretta Lynn’s father in Coal Miner’s Daughter in 1980.  Before this, of course, he was the drummer for The Band.    I would have killed to attend a concert in his Woodstock barn, where he did his Midnight Rambles with great artists of the day.

Levon left the table in 2012 at the age of 71.  He died of throat cancer.  Bruce Springsteen said of him, “We get so used to hearing versions of the thing.  Levon is the thing.”  Once in your life, drive alone on a country road with your car windows open, playing Good Night Irene.  With or without hearing aids.