WHO ARE THESE TRUMP PEOPLE? 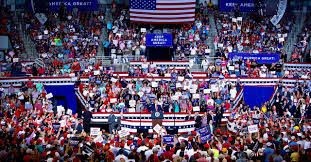 Friends of mine ask me, as a psychologist, to explain why 35% of the people in the country still admire a sociopathic, immoral, imbecile who happens to be president of the United States.  The Trumpsters know he lies, has cheated on his wife, and betrayed the country by making deals with dictators.  So what's going on here?  There are two answers:

One select group of Trumpsters care only about their finances.  They believe it is in their self-interest to accept as president a man they know is lacking in basic traits of humanity, such as caring about others less fortunate than themselves.  Some of them have contempt for the president but are concerned mostly about their own pocketbooks, even if they have enough money for two lifetimes.  They are almost as bad as Trump is.  This is probably 5% of the population. It is certainly most of the top 1% who control 99% of the wealth in the country and want to keep it that way.

To understand the remaining 30% I direct them to the research of David Dunning and Justin Kruger, Cornell University social psychologists whose 1999 research answered this question.  The Dunning-Kruger effect refers to the cognitive bias in which people of low ability at a task overestimate their ability.  In other words, while smart people often recognize what they don't know, dumb people are ignorant of their dumbness.  To put it in nicer terms, incompetent people don't know they are incompetent, because they don't have the skills they need to recognize what a correct thought is. Some of these people suffer from "anosognosia," which is a neurological disorder leading to a deficit of self-awareness, a condition in which a person with a disability is unaware of having it.  Anosognosia results from brain damage, usually to the parietal lobe, sometimes to the front--temporal-parietal area of the right hemisphere.

In a number of their experiment, Professors Dunning and Kruger tested undergraduate psychology students by giving them tests of logical reasoning. They then examined  the students' self-assessments of the results of these tests.  After learning their scores, students were asked to estimate their ranks in the class.  The competent students underestimated their class rank and the incompetent students overestimated theirs. In fact, students who scored as lost as in the 12th percentile in tests of their sense of humor, knowledge of grammar and logical reasoning, thought that they had scored as high as 62%.  This explains who many of my students who get low scores in their tests or papers argue that they have done better than they did.  Even when I give back papers for a do-over and better grade, they don't change a word.

So from now on, when you are wondering about why people still follow the cretin who is our president say to yourself, are they rich or do they suffer from the Dunning-Kruger Effect.