The Witch and the Dollhouse

When I was young, I lived on the 6100 block of Ellsworth Street in West Philadelphia, a street of semi-detached houses on both sides of the block. The north side of the 6000 block had houses also, but the south side had only one home: a stately mansion with an iron gate surrounding the massive property. A friend of mine lived across from the mansion, and she said no one ever saw anyone come or go from the house. She told me a witch lived in the house. She dared me to climb the fence, and go up to the house, look in the window, and see what the witch was doing.

One Saturday afternoon, I decided to accept the dare. I climbed the fence and sneaked up to a window off the front pouch. Before I could get a look at the inside of the house, the front door opened, and an older woman came out. She said, "Can I help you?" She had white hair and was wearing a sweater and skirt. Resting on the sweater was a string of pearls.I told her the truth: I wanted to see the inside of her house. She said, "Then come in." Not sure whether or not witches are known for their lovely jewelry, I bravely followed her into the house.

The witch led me into the mansion's living room, a large, paneled space with velvet couches and tapestry chairs. She said, "Let me show you something." In the middle of the room was a magnificent dollhouse, a domicile filled with miniature people chatting on a porch, dining around a lace-covered table, playing with children on the lawn, sleeping in canopied beds on the second floor. The witch said her name was Miss Elizabeth. The dollhouse mesmerized me, and after Miss Elizabeth took a crib with a baby in it out of the nursery, I was hooked for life. After a while, I followed the witch into the mansion's kitchen, where she served me hot chocolate.

I never told anyone about my visit to the mansion; I was a child of secrets. But every year after that, I asked for a dollhouse for my birthday. Making her children happy was not high on the list of my mother's life goals, so a dollhouse never showed up. Also, I had the misfortune of having a late-August birthday, which meant panties, an umbrella, socks, and other school necessities needed in two weeks, things I would have gotten if it hadn't been the anniversary of my birth.

Over the next few years, I visited Miss Elizabeth from time to time to see the dollhouse and have hot chocolate. When I was twelve, we moved from West Philadelphia. I said goodbye to the witch and the dollhouse. I vaguely remember someone calling the property where the mansion stood "the Anderson Estate." And many years after I left the old neighborhood, an elementary school was built on the property in the early '60s; it was named the B Anderson School.

This is the odd part of this story: I didn't remember the mansion or the witch who lived there or the hot chocolate or the dollhouse for sixty-six years. As an adult, I bought a beautiful dollhouse and then another. I filled them and a half-dozen wooden bread boxes with charming miniature rooms. I created a wedding party, a Hanukkah dinner, a Christmas scene, a veterinary office. Friends gave me gifts of beautiful furniture and pretty people. Not once did I recall climbing the fence and meeting Miss Elizabeth when I was young.

Last month I read in a neighborhood Facebook post that someone was selling a dollhouse. I have three grandsons and a granddaughter, my son's children, siblings who visit and love my dollhouses. I know I should say to them, "Look but don't touch," but I'm not that kind of grandmother. Many a miniature has crumbled in their dainty little hands. I bought the neighbor's dollhouse for my granddaughter, not a Barbie doll plastic thing but a handmade, wallpapered gem. I purchased an indestructible wooden family and furniture on Amazon to fill it with. The night after I delivered the dollhouse to my son's house, I had a dream so vivid it abruptly woke me from a deep sleep. There was a fence in the dream, a woman in pearls, a mansion, and a beautiful dollhouse. I was stunned by the long-forgotten memory. I grabbed my iPad and tried to discover the Anderson estate history and the people who lived there. There was nothing to be found. I researched the name of the man I thought the school was named for. Again nothing.

I eventually landed on a Facebook site of the B Anderson School Alumni, where I asked for help in finding out who had lived in the mansion. A sleuth named Linda Keels took up the search for Miss Elizabeth. She reported that the school was named for a school district business manager named Add B. Anderson (1898-1962) lived not far from the school but definitely not in the mansion. Linda ventured into a historic building survey and discovered photos of the Hamilton-Hoffman House, circa 1959, taken by a photographer named Ned Goode. The house was built between 1791 and 1800 and sat within 112 acres of farmland purchased by a Scotsman named Gavin Hamilton, Jr. and his father as a wedding gift to the son. The Hamilton's were snuff and tobacco merchants; they owned a mill on the banks of Cobbs Creek. After his father's death, Gavin Jr.'s marriage failed, and he sank into debt. He lived alone in the house until he died in 1831, after which the house was sold at a sheriff's sale to Samuel Woodward, who soon sold it to Jacob Hoffman. The house stayed in the Hoffman family from then on, eventually passing to Elizabeth Hoffman and her brother in 1955. After Miss Elizabeth Hoffman moved to the Touraine Apartments on Spruce Street in Philadelphia in 1960, the house was demolished to make way for the Anderson School. The living room mantelpiece went to the Philadelphia Art Museum, and some of the woodwork was given to St. Peters Protestant Episcopal Church.

Because of Linda Keels, the mystery of the witch on Ellsworth street was solved for me. I now have a photo of the mansion on my office wall. I graduated high school in 1960, just as the mansion was felled. I so wish I had remembered the mansion on Ellsworth street and the kindly woman who took a lonely child into her living room so many years ago so that I could have thanked her. She gave me perhaps my only good memory of my childhood and a lifelong hobby that has brought me great pleasure, a passion now passed to my granddaughter. As I move furniture around in my dollhouse today, I think of the good witch who lived on Ellsworth street so many years ago when I was young and far more courageous than I am today. 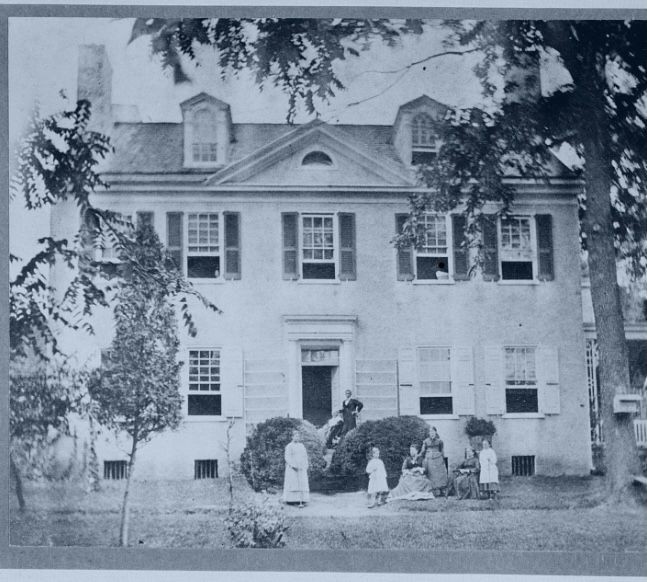